Frenchtown Police Chief Allan Kurylka retired from duty with a walk-out ceremony held at the police department on Friday.

Members of the Borough Council, Hunterdon Prosecutor’s Office staff and current and former mayors were among the dozens who attended the morning ceremony and applauded Kurylka for his 39 years of service. 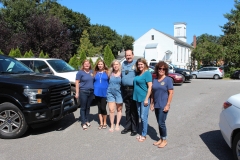 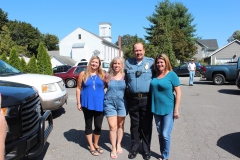 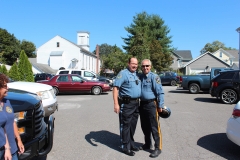 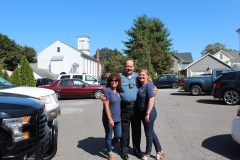 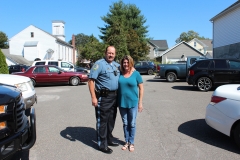 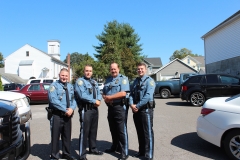 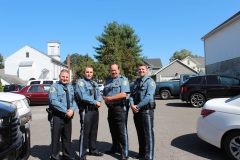 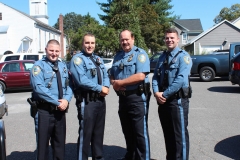 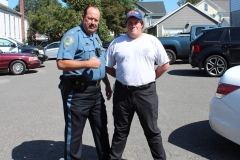 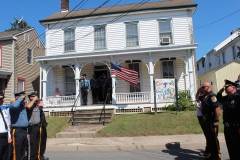 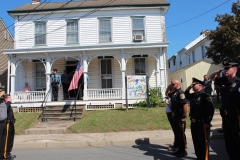 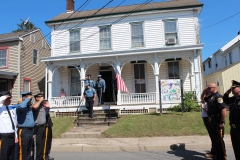 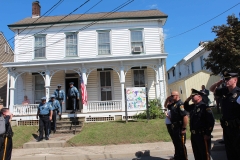 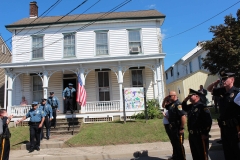 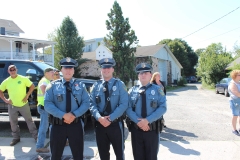 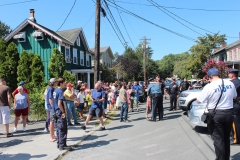 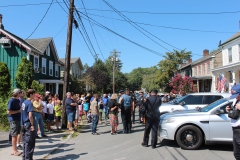 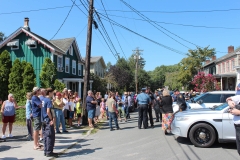 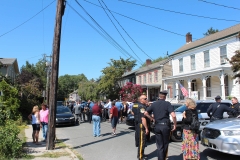 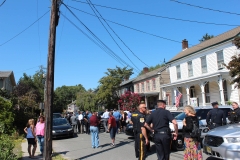 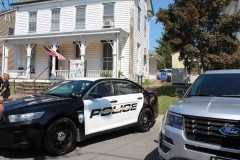 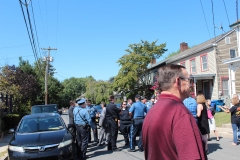 The walk-out was the first in the town’s history, according to former Frenchtown Mayor Ron Sworen, who appointed Kurylka to the position of chief in 2004. He commended Kurylka for keeping the streets of Frenchtown safe and for being “what we need here.”

“We’re a quiet, small town,” Sworen said. “We need a quiet police force that everybody knows – that sees them at different restaurants and walking around town. That’s what’s important in a small community. Having a police force who believes in the community. And you see (Kurylka) everywhere.”

Kurylka, who is turning 65 in September, said he believed he did “a great job with my community,” and will particularly miss interacting with children from Frenchtown Elementary School and Secret Garden Montessori school.

“What I’m going to miss is our kids,” Kurylka said. “When I’m up at the school every morning, we do storytelling to some of the kids. And high-fives, low-fives, whatever it might be. And the kids always left with a smile.

“And the mom and dads, if there was an issue, my office door has always been an open door. I live in town, and many, many, many nights I had kids or parents come to my house with issues. And we would sit and talk.”

Michele Liebtag, president and Fire and Police Commissioner for the borough council, said “basically everyone in Frenchtown knows Chief Kurylka, without a doubt.

“We are fortunate, as a municipality, to have someone like him, because he lives right around the corner, so he is very committed to this borough,” Liebtag said. “He firmly believes in community policing, and having relationships with council, with residents, with business owners, and with the school officials as well as with students.

Kurylka said he became a police officer because he was drawn to “the excitement and the thrill and the unknown” that accompanies a career in law enforcement.

Yet, throughout his time in the department, Kurylka said he strove to increase the safety and stability of the Frenchtown community.

“It reinforces education, and a lot of the time you get the same kids because they know they’re going to get an ice cream sandwich because they’re doing the right thing,” Kurylka explained.

Kurylka also expressed pride for the department’s medicine pick-up program, through which officers pick up medication from local pharmacies and deliver them to the sick and elderly in the community.

These efforts illustrate Kurylka’s role as what Liz Johnson, another member of the borough council, referred to as the “social worker” of Frenchtown. Johnson said that when her neighbor’s house caught fire several years ago, Kurylka stepped in to help before the fire was fully extinguished.

“We’re all watching (the house) burn, and this poor woman of course is devastated watching her whole life burn before her eyes,” Johnson said. “Before the fire’s out, Al comes over with a set of keys and says, ‘This is where you’re spending the night as long as you need to be there.’

“What he did for the people and the community in need was phenomenal.”

Last year, Kurylka was one of the first responders to a fire that left two Frenchtown businesses in shambles. While the incident devastated the town, he applauded the community’s response to it.

“I’ve been in major situations where the town gathered, and rallied, but that last incident – it could be three o’clock in the morning, and residents were coming down with baked goods or dinners,” Kurylka said. “Coldwell Banker opened up their doors for us as a command post and food was just stacking up all over.

“The way the town reached out to the first responders was incredible … You probably hear it all over the place with different officers, but I just could not think of a better community to work within.”

Because none of the officers in Frenchtown have served three years or longer, Kurylka’s replacement will be hired from outside of the department.

While Kurylka said he believes it’s time for “a younger individual with a different mindset to come in,” he expressed his desire that the next chief “continues the small community outlook” that he adopted throughout his time in law enforcement.

“Whoever comes in, I certainly hope would go downtown, attend school functions, go up to the school kids, go out and work the social and community events, be present, and have an open door policy,” Kurylka said.

While Kurylka said he is currently juggling a few different job offers, he assured that he will remain in Frenchtown and stay involved in the community through programs like goHunterdon.

“I just cannot sit down and not do anything. I gotta stay busy,” Kurylka said. “I’m not by any means going to walk away and not be involved here.”

Mayor Brad Myhre described Kurylka as the “figurehead of Frenchtown.”

“The chief was extremely involved in many things in the community,” Myhre said. “In many ways, he was the face of a lot of events. He certainly gave us a lot of stability, with his 39 years of service to the borough. So it’s going to leave a big void, but he’s leaving behind some excellent officers that he’s trained, and some new young blood that we’re looking forward to working with us going forward. And he still lives in the community, so we’ll see him around.”

Kurylka expressed his appreciation for everyone who attended the ceremony.

“They came out, and they were so supportive today, and it was very very overwhelming. I cried like a baby back there. But, it’s a long time coming to end,” Kurylka said.